Pertussis – 2: The Slaughter of The Innocents

In the last post, I discussed the importance of mucus and cilia.  In short, cilia in the trachea and other airways combine with a river of mucus to clean the air we breathe and move it up (yes, against gravity) out of the trachea.

Pertussis is caused by the bacterium Bordetella pertussis.  This organism basically destroys cilia and the epithelial cells from which cilia grow. Here’s a picture of the bacteria lodging themselves between cilia.   The beasts are in greenish-yellow, and the cilia are salmon-colored.  Conveniently rod shaped, see how the pertussis bacteria fit between individual cilia? 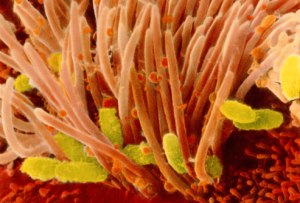 (Picture from WebMD.com)  The pathology of B. pertussis is well-understood.  As the bacteria develop, they a) emit specific toxins that kill the cilia and b) induce a cascade of biochemical responses to further screw up the body’s ability to heal.  Entire regions of cilia are shredded.  Here’s a picture to illustrate this response:

(NB: This pic came from here)  As you can see, the non-ciliated epithelial cells are useless to assist in mucociliary clearance.  I bet you can guess what happens next as the disease develops.  Here it is in an infant girl, courtesy of the Mayo Clinic’s archive.  Warning:  This video is disturbing.  But don’t look away – it dishonors those innocents who suffer and die from this terrible, cruel disease.  Sit with her; count the seconds between her breaths.

Imagine coughing all the time if your cilia couldn’t work.  Really:  imagine it.  Your diaphragm could collapse.  After all, that is the muscle that controls breathing.  Just like any muscle, it has its limits before it is so exhausted it cannot go on.  In a weeks-old infant, that’s exactly what happens.

Here’s what childrens’ hospitals sometimes do when an infant can’t take it anymore.  They have to breathe for them.  Here’s a picture of a baby getting cardio-pulmonary assistance after an attack of pertussis. (You can visit the source page here.)

Image via the CDC. Infant being treated for severe pertussis infection. She received extracorporeal membrane oxygenation (ECMO), a procedure that can take over the work of the lungs and heart. She also received dialysis to help her kidneys keep working.

You know what is really interesting about B. pertussis?  Humans are the only known hosts.  The implication is clear: an infant contracts pertussis by exposure to another human harboring it.

Fortunately, the pertussis vaccine is effective in preventing transmission.  However, newborn infants can’t be vaccinated against pertussis until about 6-8 weeks old, and then the infant needs booster vaccinations at 4 months and 6 months to increase immunity.  See this vaccination schedule (the vaccine is called the DTaP vaccine).

So here’s the takeaway risk analysis: In my humble opinion, these simple facts indicate anyone in contact with infants must have the most pertussis immunity they can get.  Breaking it down, those in contact with infants shouldn’t have the germ in them (detectable using modern biotechnology), and they should have detectable pertussis antibodies.  That is a very high level of care.  But while the actual chances of an infant contracting pertussis may be perceived to be low, the consequences of getting it may be fatal, absent extreme medical intervention.

That’s why I advocate universal vaccination.  Otherwise, there are significant, perhaps upsetting, social consequences.  Family members or friends who are not immunized or refuse to be vaccinated may need to be excluded from contact with a newborn.  This can lead to some very tough conversations. But when the life of an infant is at risk, the limits of these relationships have to be considered.

I conclude by asking this question: by not adhering to some simple rules like those suggested, are we knowingly exposing innocent infants to suffering and death?  I say we are.  So getting a pertussis vaccine is tantamount to “doing unto the least of these my brethren.” I’d like to not have to explain otherwise on the day of judgment.

I'm a chemist, patent attorney, husband of one wife, dad of two sons, and I am (a progressive, whatever that label implies) Christian. I have had a rich, varied life and I give thanks for it. Just to be clear, this blog reflects personal views and is not intended as an advertisement for legal services, or should be considered a "law blog." You should not take anything I say to be a legal opinion on any topic and you don't create an attorney-client relationship by reading it. That requires an executed written contract.
View all posts by patlowder →
This entry was posted in Uncategorized. Bookmark the permalink.

3 Responses to Pertussis – 2: The Slaughter of The Innocents